Presented by Artspace and the National Institute for Experimental Arts, College of Fine Arts, University of New South Wales

Bringing together leading theorists of contemporary art and culture, curators and artists over a single day, ‘Another World’ asks how twenty-first-century global crisises — whether financial, environmental, social or political — have transformed the context of art practice and analysis. In the face of the Occupy movements, the Arab Spring, climate change and environmental disaster, what new aesthetic tactics and strategies are emerging? How do new ways of operating challenge existing modes of representation, exhibition-making and theoretical analysis? Do we need to rethink our disciplinary practices in response to the demands of the momentous events that shape contemporaneity or the new everyday?

Nicholas Mirzoeff will survey his work in critical visuality studies from the completion of his book project The Right to Look: A Counterhistory of Visuality in 2010 to the present as it has intersected with the global social movements. In 2010 he began a born-digital multimedia project using the Scalar software developed by the Alliance for Networking Visual Culture. ‘We Are All Children of Algeria’ examines the role of visual culture in Algeria during the revolution of 1954-62 and thereafter, and the role of ‘Algeria’ in global visual culture. The project developed using the form of a demonstration, which, at the time, seemed to require some explanation. With the explosion of the Arab Spring 2011 and the global social movements from Spain to Greece and now the US, it can be seen rather as evidence of Mirzoeff’s contention that in the crisis of visuality, certain old possibilities re-emerge and interact with the new situation to produce conditions of possibility. In January 2012 he began a durational writing project, modeled on durational performance, in which he undertook to write on (or from the perspective of) the Occupy movement on a daily basis, published online. Now over half complete, Occupy 2012 has become a new way to enact and perform ‘the long form’ of critical studies while also permitting a daily engagement with social movements.

It seems to be easier for us today to imagine the thoroughgoing deterioration of the earth and of nature than the breakdown of late capitalism; perhaps that is due to some weakness in our imaginations. Fredric Jameson, The Seeds of Time (1996).

In the context of a symposium exploring the possibility of ‘Another World’, and an exhibition that begins from the premise, ‘Everything Falls Apart’, Jill Bennett’s talk will ask whether it is, as Jameson once implied, harder to envisage ‘another world’ than the end of the world. Underlying this inquiry is a belief that contemporary art has a ‘function’ or practical value in the midst of global crisis. But if critical art and exhibition practice is adept at imagining new configurations of social relations, how easy is it for such practice to confront, simultaneously, the deterioration of the earth? Do the methods of contemporary art and exhibition-making serve this purpose or are they transforming as major exhibitions shift their focus to questions of ecology?

There are many indicators that we are undergoing what amounts to an epochal change — or, more accurately, a change from historical development understood as a sequence of periods to conditions in which not atemporality but multiple, antinomial temporalities prevail. This is playing itself out in each of the arts, in ways particular to each but also somewhat shared. To put it in terms that read as if they are naming successive versions of the same kind of thing but, in fact, are signs of splitting, we are living through a movement from modernity through postmodernity to contemporaneity and planetarity. These developments occur unevenly, at different times and at different rates, and do

so distinctly in each place. Some are already historical; others are in their early stages. Most of us experience this situation as an all-at-once coincidence of different temporalities and spatialities. In its immediacy, multiplicity, and dispersive spread, it feels as if all structures have evaporated, as if historical continuity has disappeared from human affairs and the ongoingness of natural phenomena has melted away. The paradox of contemporaneity, however, is not that human and natural continuity has suddenly expired and that incipience prevails in everything, everywhere and everywhen. It is, rather, as climate change among other indicators tell us, that these two continuities — which separated during modernity — are not only reintegrating but also changing places as drivers of planetary destiny.

If art is to have any place in addressing the global crises of the 21st century, it lies in its capacity to create new forms of political imagination that open a spectrum of possibilities for living our lives on different terms. Perhaps if there is one thing to learn from the recent anxiety permeating the art world it is that the political importance of art will lie not in the confirming message it conveys but rather in the possibility of questioning rigid forms of identities and fantasies of righteousness. There is much that needs to be explored as to art and its work of informing a political imagination. What forms of subjectivity does an artwork envisage? In what sense, if any, might engaging a work alter this form? How might such alterations be mediated by sedimented desires and the concrete histories we are connected to? Looking to the recent video trilogy ... And Europe will be Stunned and representations

of the Jewish Renaissance Movement in Poland, Simon will consider the slow action of Yael Bartana’s aesthetic strategies for creating a political imaginary.

What strategies might artists and arts workers pursue in the face of the form of dramatic, unexpected disaster that destroys much of their immediate working environment, drastically effects supporting infrastructure, and utterly alters the societal and psychological context in which they work? What place is there for artistic practices amongst the necessary concentration upon civic healing and recovery? How might — indeed should — artists and cultural producers more generally react to pressures towards the utilitarian cooption of their practices to the collective goal of rebuilding place — of constructing ‘another world’. This presentation will briefly pick up on some of these issues drawing on examples emerging in the post-earthquake environment of Christchurch, NZ.

The symposium will be followed at 5pm by the launch of Jill Bennett’s new book, Practical Aesthetics: Events, Affect and Art After 9/11 (I.B. Tauris, 2012) in the Artspace galleries and a private viewing of the exhibition Everything Falls Apart Part II, curated by Mark Feary and Blair French.

Immediately following the book launch a free bus will depart Artspace for the opening of the exhibition There’s a Hole in the Sky at Campbelltown Arts Centre. Departs promptly at 6pm.

Jill Bennett is Professor and Director of National Institute for Experimental Arts and Centre for Contemporary Art and Politics at College of Fine Arts, University of New South Wales. Her authored books include Practical Aesthetics: Events, Affect and Art After 9/11 (2012) and Empathic Vision: Affect, Trauma and Contemporary Art (2005).

Nicholas Mirzoeff is Professor of Media, Culture and Communication at New York University. His books include The Right to Look: A Counter-History of Visuality (2012), An Introduction to Visual Culture (1999/2009) and Watching Babylon: the War in Iraq and Global Visual Culture (2005).

Kim Simon is Curator at Gallery TPW in Toronto where she has also curated art in public space projects including for Nuit Blanche Toronto.

Mark Feary is Curator at Artspace where recent exhibition projects include How Yesterday Remembers Tomorrow, The Others Other and Everything Falls Apart (all 2012).

Ella Barclay is an exhibiting artist in the upcoming exhibition Crisis Complex at Tin Sheds Gallery, University of Sydney.

Zanny Begg is an exhibiting artist in Everything Falls Apart and Director of Tin Sheds Gallery, University of Sydney. Tom Polo is an artist and guest curator of the exhibition There’s a Hole in the Sky at Campbelltown Arts Centre.

The participation of Nicholas Mirzoeff has been organised and supported by the National Institute for Experimental Arts, College of Fine Arts, University of New South Wales.

The participation of Kim Simon is supported by the International Visitors Program of the Australia Council for the Arts, the Australian Government’s arts funding and advisory body. In association with Centre for Contemporary Photography, Melbourne and Contemporary Art Spaces Tasmania. 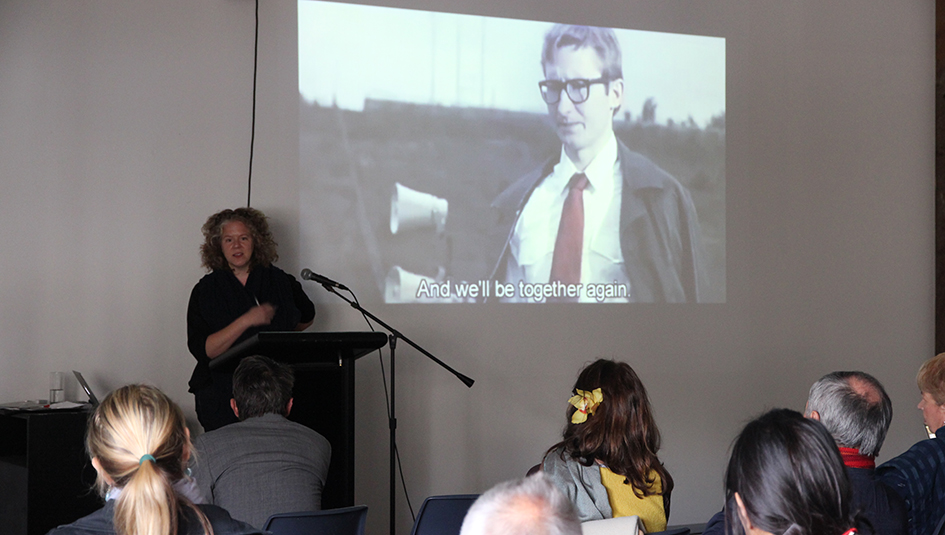