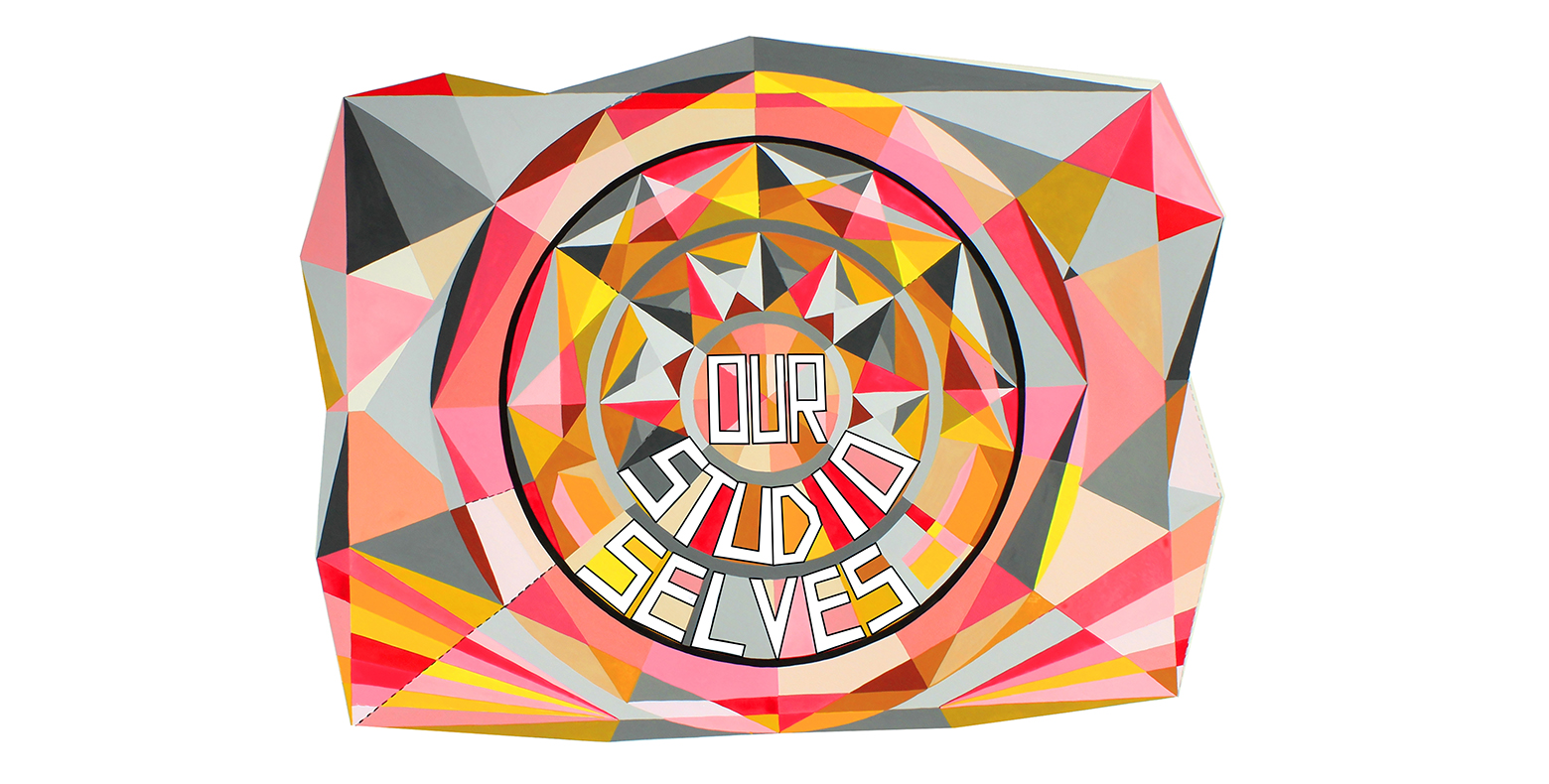 Tricky Walsh, 'All the mystical behind the scenes', 2017, gouache on paper. Courtesy the artist and Bett Gallery, Hobart; and MARS Gallery, Melbourne

Curated by Jasmin Stephens, Our Studio Selves presents ideas about the role of the studio contributed by artists from Australia and Southeast Asia. While it does frame artists in terms of their sites of production, it is intended to be inclusive of those without studios and whose practices are collaborative as well as those who produce and present across material and digital space. For the artists in the exhibition, the studio entails a commitment to reflection and growth which can conceivably embrace the efficacy of the journal, the pool and the laptop. The interior nature of these processes suggests the acquisition of insights that are hard-won and which may not be immediately apparent.

Until the nineteenth century, studios in Western Europe were conducted as workshops staffed by assistants which is a model that today’s large scale project-based studios are returning to. Travel, residencies and co-living are now also viewed as essential experiences which are overtaking the primacy of the studio. Despite these trends, however, there has been a proliferation of studio imagery and a revival of interest in classic texts devoted to the themes of creativity.

Australian writer David Malouf offers an historical context for the exhibition. In his 2011 essay The Happy Life, he cites French philosopher Michel de Montaigne’s (1533-92) desire to retreat to a ‘little back-shop’. Noting Montaigne’s aristocratic status, Malouf acknowledges this aspiration as present in Western thinking and as a perspective that can be extended to other philosophical traditions. Any consideration of the ‘creative life’ must include Virginia Woolf’s A Room of One’s Own (1929), her celebrated essay in which she argues that women must have the financial independence and the recognition to write in the face of patriarchal and other normative constraints.

At the same time, the exhibition is framed by the emergence of labour conditions that are characterised by the personalisation of work and a greater intolerance of idleness. Traditional notions of the studio are being challenged as much by the corporatisation of space and property as the shifting aspirations of artists.

However, as these artists reflect, against the backdrop of the digital evolution of the art market, the internationalising of peer relationships and the diversification of audiences, the ‘veracity’ of the studio persists.

Jasmin Stephens is an independent curator living and working in Sydney. She has held senior positions with Artbank, the Museum of Contemporary Art Australia (MCA) and Fremantle Arts Centre. She has curated exhibitions at Perth Institute of cContemporary Art, Edith Cowan University, UTS Gallery, Sherman Contemporary Art Foundation, and with artist David Haines at Kuandu Museum of Fine Arts, Taipei, in association with Asialink. As part of research platform Contemporary Art and Feminism, she has recently worked with London-based Genevieve Chua, as well as with Australian artists Alex Martinis Roe and Raquel Ormella at The Cross Art Projects in Sydney. She has lectured in the Master of Curating and Cultural Leadership at UNSW Art and Design and is currently a collaborating curator on Sugar vs the Reef?, a multi-year project led by artist Lucas Ihlein.

Teelah George’s multidisciplinary approach encompasses painting, drawing, installation, sculpture and textiles. Her work often employs collections and archives as a point of departure and reflects her interest in peripheral materials and ideas. Residing in Perth, she has drawn inspiration from her family history — employing a memoir that recounts the lives of abattoir workers in Wyndham in the early 1900s. She has explored fine art and social history collections such as the Cruther’s Collection of Women’s Art which is housed at the University of Western Australia. For her forthcoming solo exhibition at Orexart in Auckland she will continue her engagement with oral history. Teelah’s work is held in the collections of the Art Gallery of Western Australia, the City of Joondalup, the Cruther’s Collection of Women’s Art and the University of Western Australia.

Chayni Henry’s account of life in her home town of Darwin is frank and funny. It can also be dark and surreal as she turns her attention to the broader issues of politics and race relations in the Top End. Her paintings — with their customary anecdotes applied in texta pen — are intimate, feminist and irreverent. Chayni’s work is held in many public collections including Artbank, the Charles Darwin University Collection and the National Gallery of Australia as well as private collections such as the Corrigan Collection and the Toga Group Collection. An experienced educator, Chayni is currently facilitating an exhibition by the women of Aurukun, Far North Queensland, for the forthcoming Cairns Indigenous Art Fair. She regularly conducts outdoor painting workshops with long grassers in Darwin.

Chitti Kasemkitvatana is an artist and a curator who lives in Bangkok. In the early nineties he studied at Prahran TAFE and RMIT University in Melbourne where he met Aleks Danko, his teacher and a senior Australian figure who is contributing to the exhibition. He has a longstanding interest in the relationship between actions and installations and the transmission of ideas across networks. Through his involvement with independent projects, About Studio/About Café as Curator (1997-9) and Messy Sky as Co-founder and Co-editor (2011-15), he has made a significant contribution to the Thai art community. He is now Curator in Residence with Mrigadayavan Palace, Cha-am, an important heritage site. A recipient of a DAAD residency in Berlin in 2014, he has recently been included in group exhibitions at Centre Pompidou, Paris; FUTURA Centre for Contemporary Art, Prague; and Silpakorn University, Bangkok.

Minstrel Kuik is a contemporary photographer whose conceptual approach leads her to work in two-dimensional and three-dimensional formats. She lives in Kajang, Malaysia, and studied painting in Taiwan before studying photography in Arles, France. She has exhibited across the photographic world — notably at FotoFest, Houston; Photoquai, Musée du quai Branly, Paris; and Photo Bangkok, Bangkok. Recently, she has undertaken a residency with Fukuoka Asian Art Museum in Japan and exhibited at Chiang Mai City Arts and Cultural Centre, Thailand; George Town Festival, Malaysia; and Art Stage Singapore, Singapore. Her current exhibition P for Place 2007/2017 is the first in a three-year program considering ‘Chinese-ness’ at Hong Kong artists’ initiative Lumenvisum, curated by Singaporean curator Zhuang Wubin, and launched in association with his survey publication, Photography in Southeast Asia: A Survey (2017).

Todd McMillan has a video and photographic practice which is imbued with a melancholic sensibility and shadowed by his literary and philosophical preoccupations. Following a decade of creating endurance works, he has increasingly focussed on the possibilities of the nineteenth-century cyanotype photographic technique — its romantic and granular qualities underpinning his existential and ecological concerns. His ten-year retrospective, Ten Years of Tears, was shown at the Museum of Old and New Art in Hobart in 2013. His work is held in numerous collections including the Art Gallery of New South Wales, the Museum of Contemporary Art Australia (MCA), the National Gallery of Victoria and the John Kaldor Collection. Todd, who lives in Sydney, teaches in Photography and Situated Media at the University of Technology, Sydney. He is represented by Sarah Cottier Gallery, Sydney.

For this exhibition, Todd has deployed the 1957 post-apocalyptic novel, On the Beach, by Neville Shute — the inspiration for the Hollywood film (1959) starring Gregory Peck and Ava Gardner; the Australian telemovie (2000); and the Sydney University eighties art theory journal.

Mish Meijers and Tricky Walsh maintain solo, collaborative and collegiate practices from their home in Hobart. One of their enduring collaborators is the fictitious collector Henri Papin. In their work, the unofficial, the vernacular and the hand-made connect them to protest histories and feminist and queer genealogies. Recipients of many awards and prizes, they have been commissioned by Detached Cultural Organisation to develop a public artwork for Hobart’s iconic Mercury Building. Between 2007–2011, they initiated and ran, together with its Board, 6a ARI. Mish Meijers is represented by Bett Gallery, Hobart, and Tricky Walsh is represented by Bett Gallery, Hobart, and MARS Gallery, Melbourne.