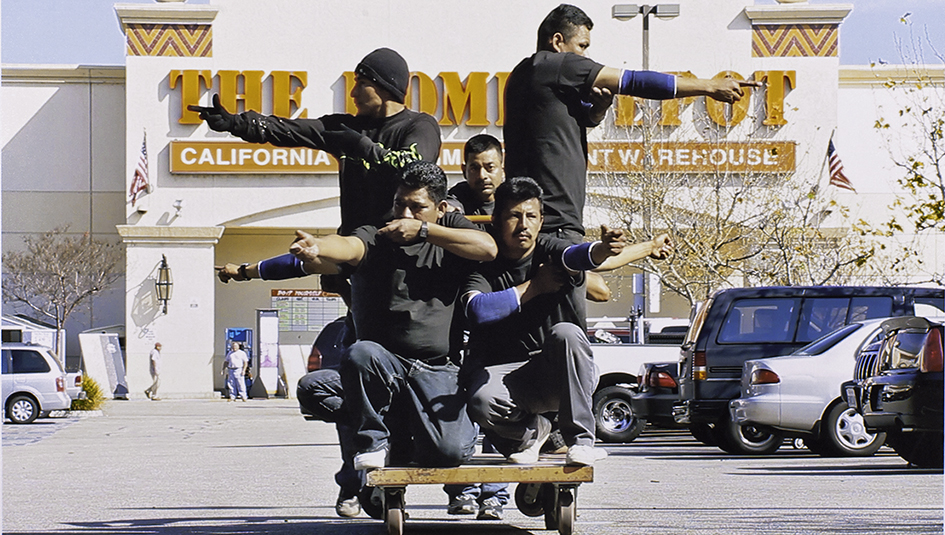 Working primarily in video, Okón combines the genre of documentary with performative and improvisational elements that together blur the boundary between reality and fiction. His videos are often characterised by an uncomfortable and confrontational humour, used as a device to implicate the viewer and also activate them as a participant. In Okón’s work humour is often utilised for its cathartic potential.

Filmed in the parking lot of a Home Depot store in Los Angeles, Octopus features a group of undocumented Mayan immigrants re-enacting — in the performative tradition of American Civil War re-enactments — their participation in armed conflicts during the Guatemalan Civil War (1960–1996). Brought together in the present by their adverse circumstance — searching for daily cash-in-hand jobs — these workers once fought against each other in a gruelling period of unrest which devastated their home country and ultimately forced them to leave in search of a ‘better life’.

Octopus references the involvement of the CIA and the American business United Fruit Company — nicknamed ‘octopus’ or ‘pulpo’ in Guatemala because of its massive landholdings and stranglehold on the country’s export economy — in the infamous 1954 Guatemalan coup d’état in which the United States government forcefully deposed a democratically elected president. This intervention marked the beginning of a long and sombre period of oppressive dictatorships that protected and prioritised multinational corporate interest and, among a litany of human rights violations, caused the genocide of Guatemala’s Indigenous Mayan population.

The camera in Octopus acts as a catalyst that unleashes the artist’s collaborators, empowering them to act out an assumed character, revealing in the process their awareness and understanding of their itinerant reality. Described by Okón as near-sociological experiments, his works give the audience a unique insight into the marginal groups he portrays. Most importantly, they also evoke a sense of interconnectivity: deeply implicating us in issues that we may normally consider foreign or removed from our everyday lives.

Yoshua Okón was born in Mexico City in 1970 where he currently lives and works. He has been an important figure in the Mexican and international art scene since the 1990s and his contribution has extended beyond his practice through his founding of paramount artist-run initiatives La Pandería and SOMA in Mexico City.

Ivan Muñiz Reed is an independent curator, writer and researcher with a keen interest in Latin American practices and perspectives from the global south. He is a founding member and Associate Curator at The Curators’ Department. Recent and forthcoming projects include Repertoires of Contention: Tony Garifalakis and Joaquin Segura at Gertrude Contemporary, Melbourne (2017); the regional arts project Right Here Now, at the Museum of Australian Democracy; and a solo exhibition of celebrated Australian artist Rosalie Gascoigne. He was previously Assistant Curator at the Museum of Contemporary Art Australia where he contributed to major exhibitions including Volume One: MCA Collection and solo exhibitions by leading international artists such as Yoko Ono and Wangechi Mutu. As an independent curator he has facilitated a series of cross-cultural exhibition and editorial projects between his native Mexico and adopted Australian home. He is currently based in San Francisco, California, completing a PhD on decolonial aesthetics.