Project of a Boundary, Portable Affairs

Project of a Boundary was conceived as a series of site specific exhibitions by five young Chilean artists (presently four): Mónica Bengoa, Paz Carvajal, Claudia Missana and Ximena Zomosa; they state a coherent body of site specific works around the concept of border as limit and juncture, from the specific nature of gender.

Project of a Boundary was conceived as a series of site specific exhibitions by five young Chilean artists (presently four): Mónica Bengoa, Paz Carvajal, Claudia Missana and Ximena Zomosa; they state a coherent body of site specific works around the concept of border as limit and juncture, from the specific nature of gender.

This cycle of exhibitions began with Proyecto de Borde at the Contemporary Art Museum in Valdivia (Chile) in 1999. The exhibition hosted five installations specifically created for this huge building. On this occasion the artists linked their personal proposal with space, establishing a series of relations between each work and generating an whole, articulated around a shared theoretical space. The main idea was based on a policy of the everyday, an intimacy appropriating public space. Later, in March 2002 the Fuller Museum in Brockton in the outskirts of Boston, Massachusetts hosted Project of a Boundary, Unfold based on the notion of ephemeral and specific works for the exhibition space. This show required the production of works adjusted to the challenges of tension and questioning demanded by a new cultural context. In July that same year the New York Latincollector Gallery presented Project of a Boundary, Fold presented as the second stage of this project, managing to project the issues surrounding Chilean contemporary art in a place of importance among the international art circuits. Both US exhibitions worked with the subject of the border as fold and unfold as work and stage production strategy. From a minimum materials shipment it was possible to unfold in great proportion museum spaces (Fuller Museum). This device inverted in the fold, which is the capacity to reduce the exhibition to a minor space (Latincollector Gallery).

The present project will focus on exploring the actions of geographic fold and unfolding and the crossings between two cultures of the southern hemisphere separated by the Pacific Ocean, but with a common horizon. Both cultures share similar origins from European colonisation and it is the intention of Project of a Boundary, Portable Affairs to explore the conceptual, social, political and aesthetic territories and frontiers in a work developed collectively which will use all of Artspace.

In Project of a Boundary, Portable Affairs each of the artists will develop a theoretical and material investigation for a personal installation proposal as basis for the theoretical pre-production discussion. A common thread of this stage will be the role of drawing and its extensions as platforms for the connection between the works and the appropriation strategies of the large Artspace facilities with its four galleries. These projects will be tensioned in a staging privileging the conceptual and technical grazes among the works and the specific nature of the Australian context.

Mónica Bengoa states the need to represent the previously used production systems to favor the idea of traveling with what is essential, with the precise selection capable of reconstructing the territory outside the own house. For this she prepares a tool suitcase-box whose content is a series of embroidered frames on photographically printed canvases which will then be installed in different positions on the Artspace walls, reconstructing a fragmented image to establish new crossings between photography, painting, drawing and object-like work from the notion of “still life”.

Paz Carvajal approaches the subject of the crossing between these two geographies illustrating it in an approximately forty meter long line of text which will run along various Artspace walls and will be made of letters built by jigsaw puzzles of fifteen by twenty-five centimeter each. The text will be taken from the book The Language Of Lines by Robert Lambry which gives a recipe to draw a line.

Claudia Missana explores the geographical border as limit, questioning the notion of origin with her work. The supposition of what is permanent about geography relies on a transitory material work as a metaphor of the fragileness of identity. The coast scene as landscape common to Australia’s and Chile’s border, a frontier of disaster the hiding of crimes and immigration scenes: political and geographical crossings. Materially her work will be conducted using reflecting tape (navigating chart) and charcoal on a wall with a data-show projection on top.

Ximena Zomosa faces this work from the objects and voices of two cultures found in a common moment: the reencounter with destiny. Since previous projects she takes on drawing with the line of her own hair as border between the worlds of representation and reality to stage an incomplete narration. Materially this work will use specially made (printed) and common wallpaper and natural hair. Through fragments and superposition she wishes to relate European history with the absence of body by both continents’ original inhabitants. 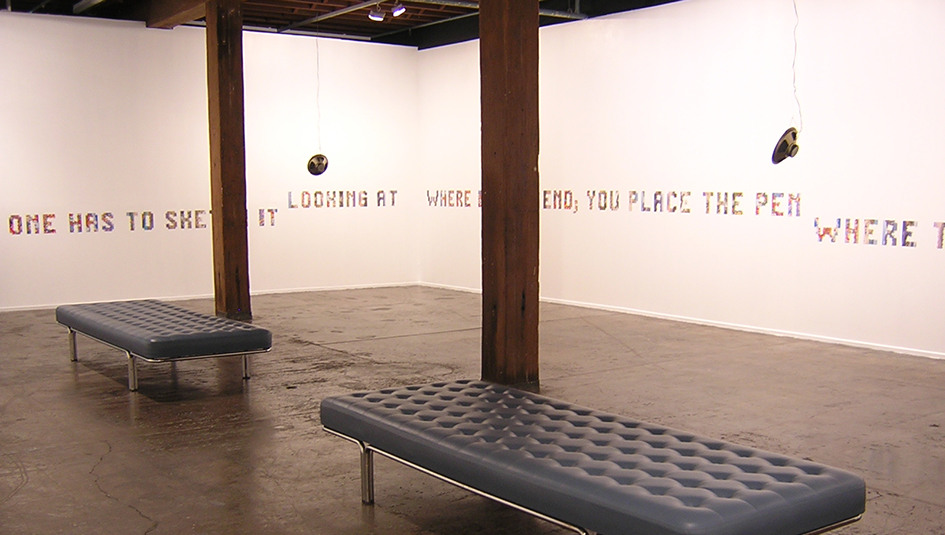