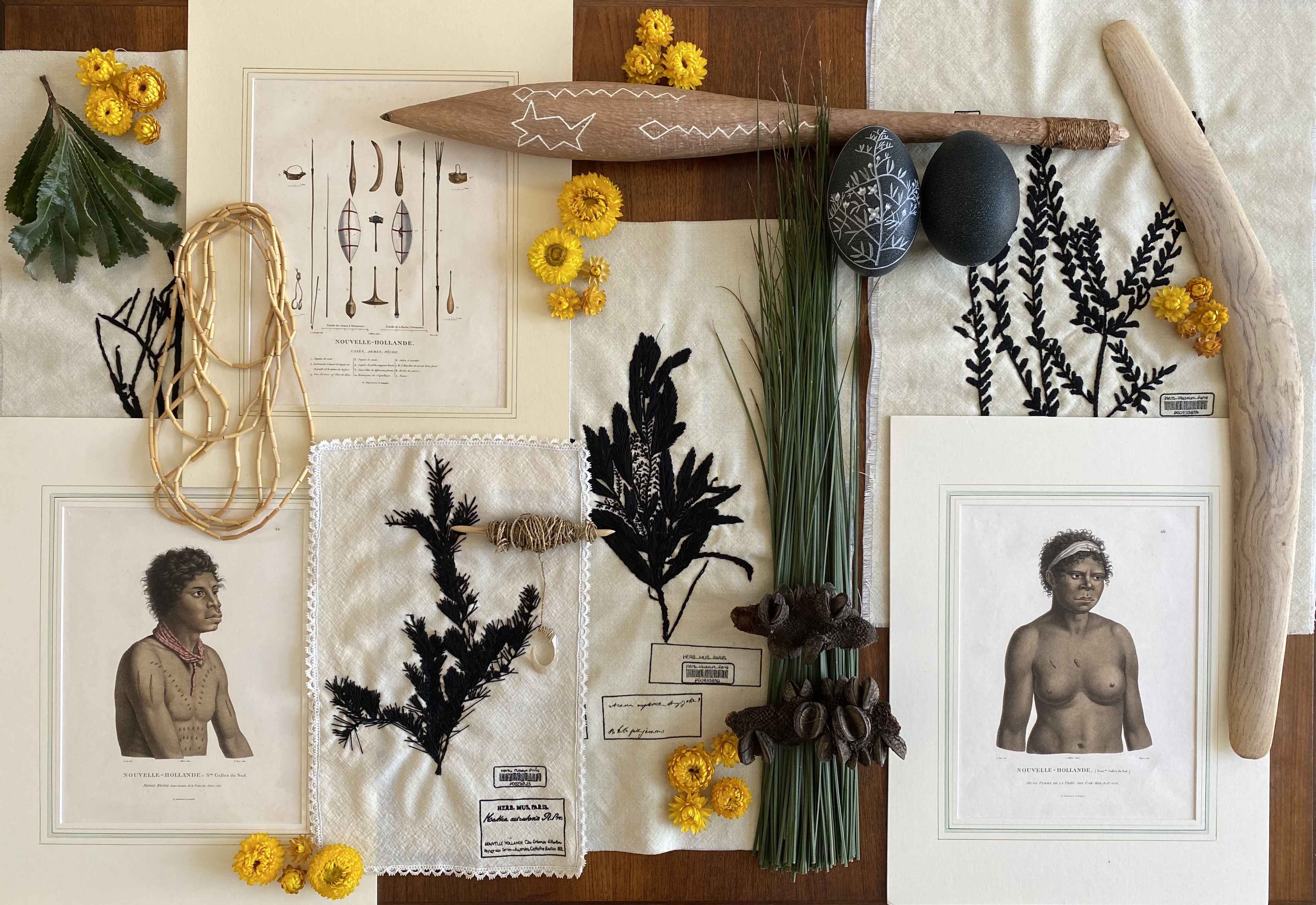 Artspace is proud to announce its new commission, Wiradjuri and Kamilaroi artist Jonathan Jones’s first solo exhibition in Europe, to be held at the Palais de Tokyo in Paris, France, from 26 November 2021 to 20 February 2022.

Jones’s exhibition, untitled (transcriptions of country), explores colonial transport, trade and the acclimatisation of Indigenous plants, animals and objects along with the colonisation of local knowledge.

The exhibition draws on the extraordinary collections gathered by a French expedition, led by Captain Nicolas Baudin, to what was then known as New Holland at the beginning of the nineteenth century. Baudin’s was one of the most extensive scientific expeditions ever undertaken in Australia, with the ‘discovery’ of more than 2,500 new species. His team returned to France with countless living plants and animals, as well as a collection of Sydney Aboriginal objects.

untitled (transcriptions of country) is compiled of multiple parts, including embroideries, sculptures, a soundscape and video. Three hundred plants, preserved from Baudin’s trip and held at the National Herbarium in Paris, have been reproduced as handmade embroideries by community members in Sydney. Sculptures, based on traditional Indigenous materials and portraits of Aboriginal people, are displayed on the walls. The soundscape is inspired by a ceremonial Aboriginal corroboree transcribed during the expedition, while a commissioned video work by Wiradjuri filmmaker Jazz Money tells the story of the project and its context.

Jonathan Jones is a member of the Wiradjuri and Kamilaroi peoples of southeastern Australia. He works in a variety of media, creating site-specific installations and exploring Indigenous practices, relationships and ideas. His work’s underlying concept is the process of mapping or tracing, as well as parallel representation of the traditional and the contemporary via the historic and present-day uses of specific sites and architectures.

untitled (transcriptions of country) will travel back to Australia and be exhibited as the opening exhibition to re-launch Artspace's new building in 2022.

Jonathan Jones’s new work is co-commissioned by Artspace, Sydney, and the Palais de Tokyo, Paris. This project is supported by the Australia Council for the Arts, its arts and funding advisory body; the Australian Government through the Australian Cultural Diplomacy Grants Program; Australia now France 2021-2022, an initiative of the Australian Government celebrating Australia’s creative excellence, diversity and innovation; proudly funded by the NSW Government through Create NSW; the City of Sydney; and the Copyright Agency. The embroideries are the result of a close collaboration with Information + Cultural Exchange (I.C.E) and with the Adorned Collective; with the support of Yamane Fayed (I.C.E.) and Liam Benson (Adorned Collective). The artist’s preliminary research in France has been supported by Lafayette Anticipations – Fondation d'entreprise Galeries Lafayette. Research and exhibition developed by Jonathan Jones with the support of elders Aunty Julie Freeman and Uncle Charles Madden.