Presented by the Biennale of Sydney 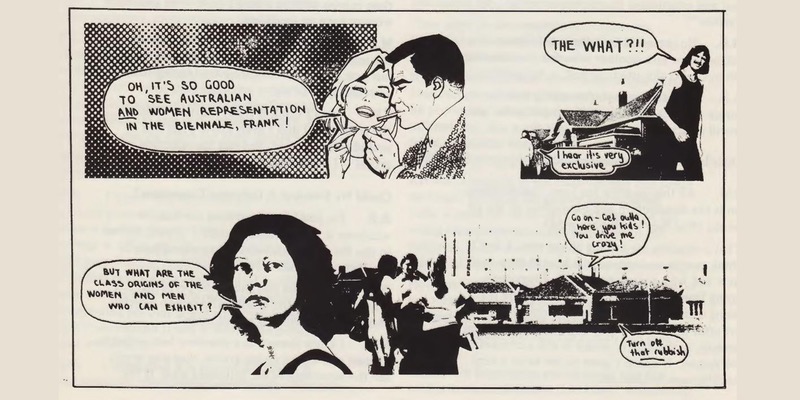 The second chapter in the Biennale of Sydney's investigation into its archive brings together four witnesses and protagonists to tell stories spanning 1979 to 2014. Approaching its 21st edition and 45th year, the Biennale considers its role over time, both in Sydney and the region. What can we learn from its achievements and controversies? What is its relevance today?

Vivienne Binns OAM made an explosion onto Sydney’s art scene in 1967 when works such as Vag Dens and Phallic Monumentwere exhibited at Watters Gallery, the former going on to become an icon of feminist art in Australia. In the fifty years since, her work has queried the nature of art as a human activity. A strong voice in 1970s and '80s efforts to improve conditions for women artists and artists generally, including the heated discussions surrounding the Biennale’s third edition in 1979, her renowned artist-in-community project Mothers' Memories Others' Memories, 1979-1981, was exhibited in the 4th Biennale in 1982.

Deborah Kelly, an artist well-known for her politically motivated and multifaceted body of work, instigated the collaborative project No Human Being Is Illegal (In All Our Glory), for the 19th Biennale in 2014. The large-scale collage portraits, realised through a process of communal creation and exchange, are emblematic of Kelly’s embrace of art’s place in a social, political and civic continuum of activity. Advocating for openness, the work celebrated collectivity and heterogeneity at a time when individual and institutional implication in Australia’s refugee policy was being publicly discussed, with the Biennale at the centre of debates.

Julie Rrap is a signature artist in Australia in the field of representations of the body, a sustaining interest and project for Rrap that dates back to her involvement with body art and performance in the mid-1970s. Her photography, painting, sculpture and video has been included in four Biennales over three decades – 1986, 1988, 1992 and 2008 – charting the artist’s engagement with a politics of the body that embraces feminism as a living practice and tool for liberation. Rrap served on the Board of the Biennale from 2004 to 2007. She has contributed to several review panels over the Biennale’s history and was a member of the selection panel for the 13th Biennale Artistic Director, Richard Grayson.

Dr Ann Stephen is the Senior Curator of the University Art Gallery and Art Collection at the University of Sydney. As a curator and art historian, her work has focused on modernism, contemporary art in Australia and conceptualism, including exhibitions and publications on the work of Ian Burn. Stephen’s longer association with Burn began in 1977 as co-editor (with Charles Merewether) of The Great Divide, a ‘critique of Australian culture under capitalism’ that included arguments against the international blockbuster-type exhibition. With Burn, Binns and many others, she contributed to Sydney Biennale: White Elephant or Red Herring?: a compilation of commentary on the 1979 edition.